“As a child, I gained the deepest understanding of food, without even knowing it.”

Raymond Blanc and a passion for food are synonymous. We feel privileged to work with him and have all seen first-hand how this passion radiates to every part of our business – from sourcing the best ingredients, to hiring the best chefs and choosing the most beautiful dining venues. 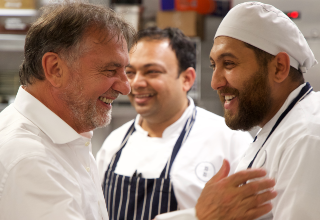 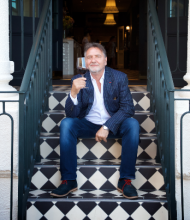 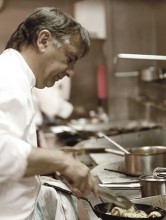 Our favourite Frenchman is bursting with an encyclopaedic knowledge & a love of real food with roots in a childhood that revolved around his Maman, and her kitchen table. Maman Blanc’s table was, by all accounts, not a thing to be trifled with. Meals there dictated the rhythm of the family days, and lives. And it is here that he learned the importance of being true to ingredients, everything in its season.

There is great beauty in honest food, cooked with heart, using kitchen wisdom passed down through the generations. And as Maman Blanc passed her knowledge and love of food to Raymond, so he passes it on to us, his team, to share with our brasserie families, and you, our guests.

One of the world’s most respected chefs, Raymond Blanc is totally self-taught.

His story begins in Besançon, the capital of the Franche-Comté region in eastern France, between Burgundy and the Jura mountains, where Raymond was born. He was inspired by the local terroir, and most of all by his mother, the formidable Maman Blanc who used fresh, local and seasonal produce to create meals for the family; wholesome meals full of goodness and love.

In the summer of 1972, Raymond arrived in England to work as a waiter at the Rose Revived restaurant in Oxfordshire. One day, when the chef was ill, Raymond took over the kitchen. At that very moment, his career was born.

In 1977, Raymond opened his first restaurant, Les Quat’Saisons in Summertown, Oxford. It was an overnight success, winning Egon Ronay Restaurant of the Year, and two prestigious Michelin stars within a couple of years.

It was in 1984, however, that Raymond fulfilled a personal vision, creating a hotel and restaurant in harmony when he opened Le Manoir aux Quat’Saisons in Great Milton, Oxfordshire. Celebrating its 30th birthday this year, Le Manoir combines magnificent surroundings with gastronomic excellence. It is the only UK country house hotel to have retained two Michelin stars for the past 30 years. Le Manoir’s eleven stunning gardens, including the vast kitchen gardens, are the envy of botanists worldwide. “His house is as beautiful as a tale of Lewis Carroll,” observed the acclaimed French food writer Gilles Pudlowski.

Raymond has always felt compelled  to share his culinary knowledge and, in 1991, he established The Raymond Blanc Cookery School. Based within Le Manoir’s kitchens, the school welcomes enthusiastic amateurs and professional cooks, as well as children, providing the opportunity for home cooks to develop their skills in a relaxed and friendly environment.

In 1996, Raymond opened his first Le Petit Blanc brasserie in Oxford. More brasseries followed. In 2006 the group was re-launched as Brasserie Blanc and there are now some 20 restaurants across England. The brasseries offer French classics and modern dishes, all made with fresh and seasonal ingredients. Each of the brasseries is a place to relax, and enjoy ‘real French food, close to home’ and at affordable prices.

In 2008, Raymond was awarded an honorary OBE (Order of the British Empire) by Her Majesty the Queen, in recognition of his services in promoting culinary excellence and for raising awareness about the importance of healthy food as a central element of family life. In 2013 he was awarded the insignia of Chevalier in the Ordre national de Légion d’Honneur, the highest French decoration.

Never one to guard his secrets and passion, Raymond has championed and nurtured some of the country’s most respected chefs personally in his kitchens, including such names as Marco Pierre White, Michael Caines, Bruno Loubet, Eric Chavot and Ollie Dabbous. Some 26 of his protégées have gone on to win Michelin stars for themselves. It is no wonder that in 2005 he was voted AA’s Chefs’ Chef of the Year.

Raymond is a best-selling author, and his BBC2 television series have included The Very Hungry Frenchman, Kitchen Secrets and How to Cook Well.

Raymond is the father of two sons, Olivier and Sebastien. 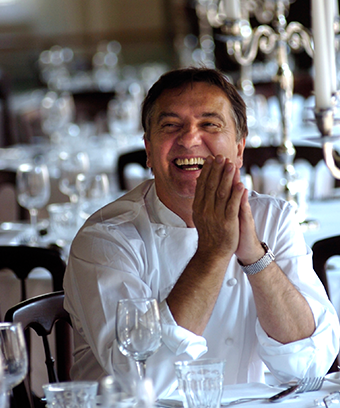 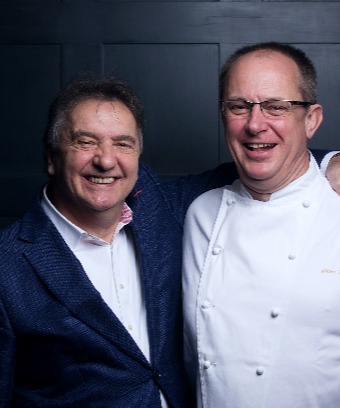 Join our online newsletter & receive 50% off mains* when two or more of you order two courses (inc a main each)… The best bit of all is this offer can be used as many times as you like during the set period so we look forward to seeing you time and time again!

Thank you for signing up to our newsletter! You are now part of an exciting email community so look out for exclusive offers, news and foodie inspiration. Please bring any discount emails with you when you next dine to be able to redeem your bespoke offer. A bientôt!
Please note that the email will take 5-10 minutes to come through to your inbox. Book a Table

We use cookies to help us give you the best experience on our web site.
You can accept all cookies or manage your preferences by clicking on privacy preferences.

Brasserie Blanc is committed to protecting your privacy and maintaining the security of any personal information you supply. We adhere to UK privacy laws and will use strict procedures and security features to protect you and your data. We never share your data with any third parties (unless clearly specified at the point at which your data is collected) and you can unsubscribe from our database at any time by clicking on the unsubscribe link in any email communications or contacting us via the Brasserie Blanc website.

CONSENT
Provider: google.com
Purpose: Used to detect if the visitor has accepted the marketing category in the cookie banner. This cookie is necessary for GDPR-compliance of the website.
Expiry: 2 years
Type: HTTP Cookie
Data sent to: United States

__cf_bm
Provider: vimeo.com
Purpose: This cookie is used to distinguish between humans and bots. This is beneficial for the website, in order to make valid reports on the use of their website.
Expiry: 1 day
Type: HTTP Cookie
Data sent to: United States

If you disable this cookie, we will not be able to save your preferences. This means that every time you visit this website you will need to enable or disable cookies again.

Marketing cookies are used to track visitors across websites. The intention is to display ads that are relevant and engaging for the individual user and thereby more valuable for publishers and third party advertisers.

IDE
Provider: doubleclick.net
Purpose: Used by Google DoubleClick to register and report the website user’s actions after viewing or clicking one of the advertiser’s ads with the purpose of measuring the efficacy of an ad and to present targeted ads to the user.
Expiry: 1 year
Type: HTTP Cookie
Data sent to: Germany & USA

common/cavalry_endpoint.php
Provider: facebook.com
Purpose: Collects data on visitor behaviour from multiple websites, in order to present more relevant advertisement – This also allows the website to limit the number of times that they are shown the same advertisement.
Expiry: Session
Type: Pixel
Data sent to: United Kingdom

Please enable Necessary Cookies first so that we can save your preferences!